Recently I went to the Fremo AmericaN meeting in the northern German city of Bremen. The trip took some doing as both halves of the train trip resulted in delays. A signalbox failure in Deventer in the Netherlands on the outbound trip meant my planned route had to be changed. On the return trip there were engineering works in the Netherlands on my route and I had to take a replacement bus. As luck wouyld have it, the one on my route was a local bus stopping at all stations and on the other route it was a fast bus. Oh well.
Luckily both NS and DB were very helpful and no additional costs were incurred. Only time delays and they were compensated by new train routes I travelled.

This meeting was the first time we tried out timetable and trainorder operation. While we had some problems I feel we can overcome them with more familiarity with the procedures. It helps of course when yours truly pays attention to the switching and makes it efficient. Oh well, live and learn, right? I had great hopes for this type of operation which is a bit difficult to do on ever changing modular setups. I was pleasantly surprised by the easy with which everyone adapted to it. Normally we use track warrant control or no dispatcher in our meetings.

See here for the report, here for a plan of the modular layout and here for Hagen Langbartel's pics. You can even see me in some of the pictures...

Thanks to all who made it possible to have a great time despite coming down with the flu.

Earlier in the year I lamented that I needed a better work environment. Fast forward to 2 weeks ago and up again pops this video on youtube after a few years.  I'm still interested in it and have asked a woodworking good friend of my parents for advice. I want different wheels so I can more easily drag it up the stairs as the place where i want to use it, living room and balcony, are 1 story higher than where it will usually reside when it is between duties.

More info including the price for the drawings can be found here.

often go awry. So did mine once spring was underway. A laptop that stopped working just hours before I was going to make a backup (a lesson there, make backups first, not last) meant I lost access to the drawings of the module of G&M Junction I'm working on. That said me back some, including thinking about continuing with modifying existing modules versus starting from scratch. But money isn't all that more plentiful.

Further, my mental and physical health took a nosedive. Got out of that okay but it took quite a bit of scarce energy, including in therapy sessions. Then I started a 2 day a week volunteer job at the local maritime museum. That takes a lot of energy, a hell of a lot, but it gives me back much too since this is the first time I've been able to work in 5 years.

And now we have a hot late summer with temperatures around 30C which means much of that heat lingers on for days afterwards in my top level corner appartment with walls on the east, south and west sides...

But I found my interest in model railroads again so we will see what I can do next. I can certainly use the diversion from my health problems that might get worse in the coming months due too an incompetent doctor no longer prescribing medication that barely worked anyway.

So, onwards we soldier even if it has to be done without being able to go full steam ahead.
Posted by Naomi at 1:21 PM No comments:

Today I completed the sawing apart of the modules that will form the core of G&M Junction. Last weekend the batteries of my drill had run empty drilling holes for the jigsaw and by the time they were charged again it was too dark and too cold.
I had some problems today which surprised me a bit. It turned out it was more difficult to make a vertical cut through the horizontal piece of plywood that forms the top than I expected. Wasted 2 sawblades on it. Also, the plywood has internal layers that are much harder than the outer onces, complicating matters. I didn't manage to saw in a straight line but that isn't as much of a problem I hope as it sounds as there will be new endplates that have to be affixed to the sawcut.

Also, some nails vibrated loose and I didn't see one in time so I opened the skin of a thumb on one. Needless to say the offending pieces of metal are now history...

I layed out the pieces on my balcony as I intend to use them and used the parts that once where the lower half as stand in for the new segments. I will try to use those pieces first before I build new segments. Money is scarce so it's worth a try.

Oh, and find a way to upload the pictures I took so you all get an idea what I'm talking about. Can't find the software that came with my digital camera (bought it all the way back in december 2008) and I have never used it on this laptop...

Lessons learned:
- 9 mm plywood is plenty strong enough, these modules were build back in 2009 and were otherwise still sound, despite being stored on their endplates since 2011 and my less than perfect construction methods.

- I need a better work environment when working on large items or doing rough work like sawing.

- SAFETY FIRST! I need to buy new safety glasses as I couldn't find the ones I have and flying sawdust is no fun. Not to mention things that could have happened with a nail coming loose enough to fly away.

- And yes, old modules CAN be taken apart and the parts rearranged to make a different module.

De kop is er af, that is what we say in Dutch if we have started something, literally the head is off. No pictures yet but the first Fremo america-N module is now on a diet and has had the bottom half taken off. The ony reason the other module hasn't been done to that state yet is the fact that I ran out of battery power so couldn't drill more holes so the jigsaw could be used.

Still to do:
- cutting at a diagonal
- remove more material to save even more on weight, including on top as the modules had a plate on top.
- New ends
- extra support for when I'm cutting through the top plate.
- glue polystyrene to the sides to hide the holes and less than perfect sawcuts.

And of course to lay track, wire everything and build the landscape. But those are other stages.

Oh well, tomorrow is another day for doing a little bit.
Posted by Naomi at 6:26 PM No comments:

More tryouts are of course needed, including both trains and mockups of modules made out of cardboard. But a beginning for a homelayout in whatever shape it will take is there. 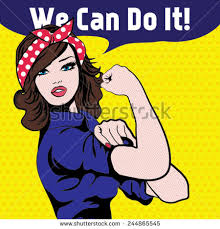 Was doing some work in the second bedroom in preparation for building a home layout when I was reminded of all the old modules I have. So I went to my storage area and looked at them for some time. Got some ideas rumbing in the back of my mind now.

One idea is to reuse a 1 meter long and way to heavy module and cut it in three smaller sections. By making the cuts at a slight angle and turning the middle section around it should be possible to make a module with a curve in it. As for a theme, I have long been fascinated by an area on the CGW, just west of Dubuque Iowa, where the railroad follows the Little Maquoketa river. There is a palisade like stretch and even a free standing rock named Split Rock. Don't know if it is natural or manmade but it seems a nice theme for a module where you look at it from the inside of the curve. In the 1970s the track was removed. Now it is a trail known as the Heritage Trail.

The wooded palisades could be made removable and stored under / inside the segments that would be screwed together in the original shape to facilitate transportation by public transport. 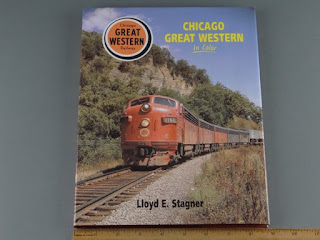 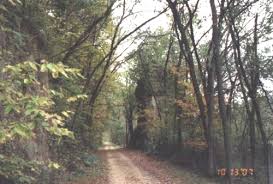 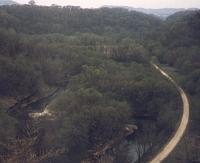 The M&StL Adelaide station was a very simple affair, 1 switch. The station was the first station west of the junction at Conde on the line to LeBeau on the Missouri river in South Dakota. Today you can't
I have 2 Fremo americaN modules that are 50 cm long. Originally they were to be modules portraying single track going to double track but I gave up on that.
Seems to me that since the modules stacked together form a compact unit and since Adelaide had virtually no buildings beside 2 elevators that likely can be stored under / inside a segment, it is an ideal candidate for a Fremo americaN module!

Today there isn't even a trace of this town that didn't even got off the ground. It was located in southwestern Beotia township in Spink county, roughly where it says abandoned next to the border of sections 31 and 32. 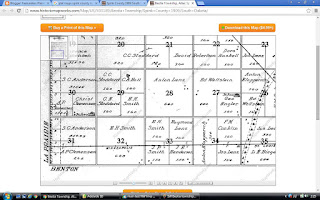 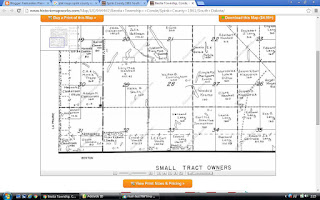